The first weeks of the Czech presidency of the European Union were marked by scandal – around the installation of “Entrop”, which the Czech Republic ordered the artist David Černý. Some visitors to the building of the European Council could not stand the power of art.

An art project has opened in Brussels, the capital of the European Union, an exhibition entitled Entropa: Stereotypes are Barriers to be Demolished – Entropa: Destroying Stereotypes and Barriers. Entropa is an initiative of one of the leaders of modern European conceptual art, the Prague artist David Černý. His idea was supported by the Czech Republic, a country that has been leading the European Union since January 1.

An art project has opened in Brussels, the capital of the European Union, an exhibition entitled Entropa: Stereotypes are Barriers to be Demolished – Entropa: Destroying Stereotypes and Barriers. Entropa is an initiative of one of the leaders of modern European conceptual art, the Prague artist David Černý. His idea was supported by the Czech Republic, a country that has been leading the European Union since January 1.

In order to remind European politicians sitting in Brussels that Europe is still a scattered puzzle of children rather than a single oil painting, Cerny came up with a giant panel of 27 parts to hang out in the building of the Council of the European Union. The panel is a map of Europe, however, all countries are located not in their usual places, but mixed up. Cerny signed a contract with the Czech government, according to which he was to hire 26 colleagues from all the other EU countries, so that each of them depicted the main stereotype of his homeland on his puzzle piece. The project was entitled Entropa, a fusion of the words Entropy and Europe. On Thursday, January 15, the grand opening of the Entropa was to take place. By that time, the panel had already hung in the lobby of the European Council for a couple of days, and the Czech press office distributed a brochure describing all the components of the panel. Visitors managed to see that the map of Denmark, supposedly the fruit of the creation of Danish participant Lars Kristjansen, is made up of Lego blocks, that Finland looks like a plank floor in a sauna, Sweden is packed in a box from an IKEA store, the Netherlands is flooded, and only minarets peep out from under the sea waves , Germany consists of only asphalt highways, a strike sign across France hangs, and a pin with the words “For sale” is stuck in tiny Luxembourg. On Lithuanian territory, the monuments of Soviet times depict a Brussels pissing boy, and Bulgaria is made in the form of a state-owned and apolny toilet, which some of us still remember from proletarian childhood. The brochure provides an explanation signed by a certain Bulgarian artist Elena Zhelebova: “This is an opportunity to cope with false patriotism and find relief from material and spiritual poverty.” Here’s what visitors said in an interview with Belgian television:

Christine Greber, an employee of the German mission in Brussels: – Germany did not quite work out. Look, everything is gray on gray, some cars! And who has a completely sick imagination, he can consider in this plexus of roads and swastika. I hope this was not the intention of the artist.

Even more provocative was the project, allegedly by the Polish artist Leszek Hirschenberger, who put Poland at the stake of several Catholic priests raising a rainbow flag of same-sex love – in Christomatical poses from a photograph of American soldiers on Iwo Jima. But Great Britain was most puzzled by the audience – instead of it, there was an empty place on the map, in other words, this country is missing on the map of a united Europe. British journalists set off in search of a conceptual empty space designated by the author in a pamphlet, artist Khalid Asadi. In vain. This person does not exist, just as there are no other declared project participants. On Tuesday night, David Cerny admitted that he invented and made all the details of the puzzle himself.

Czech Deputy Prime Minister Alexander Vondra said he was shocked at the recognition of David Cerna. Meanwhile, the Czech ambassador to Sofia was called on the carpet to the Bulgarian Foreign Ministry. On Wednesday, Vondra officially apologized to Bulgaria and promised to remove the Bulgarian part from the display if Sofia insisted on it. Most likely, this will happen, because Bulgaria has already filed an official complaint to Javier Solana, EU High Representative for Foreign Policy. The Czech Deputy Prime Minister emphasized, however, that no one was going to disassemble the entire panel, all the more so because the rest of the countries took David Cerna’s action with humor. At the opening ceremony of the Entrop panel on Thursday, David Cerny said: “We are very sorry if we have insulted any nation. Our plans were not to offend anyone. I would also like to apologize to my government, especially personally to Alexander Vondra, Karel Schwarzenberg and Mr. Mirek Topolanek, whom I deliberately misled. I hope that when we laugh at everyone, we also laugh at ourselves in this way. So this is not an insult, otherwise it would be an insult to ourselves. ”

Cerny compares himself with the author of Borat, Sasha Baron Cohen and the creators of Monty Python, and their humor was too tough for everyone. Cerny is deftly silent about why he chose these particular stereotypes for each country. When one of the French journalists in broken English asked whether he correctly saw the swastika on the map of Germany, Cerny replied: “Sorry, I do not understand the question.” At that time, quotes from Vaclav Klaus flashed on one behind the other on the map of the Czech Republic, for example: “The EU will become post-democratic.”

David Cerny also offered to return the fee, which he received for fulfilling the order of the Czech government. “Of course, we knew that the secret would be revealed. But before that, it was interesting for us to check whether Europe could laugh at itself” – said Cerny. 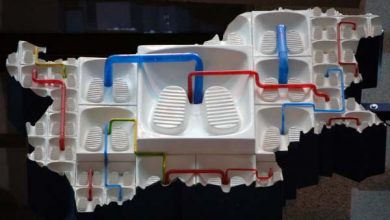