France refused to supply the first Mistral to Russia. This is stated in a statement by the French presidential administration.

“The president of the republic concluded that, despite the prospect of a truce, which must be confirmed, there are no conditions under which France could allow the delivery of the first of the helicopter carriers,” the administration said in a statement.

It is about freezing the contract until November. According to the source of the agency, during this time it will become clear what financial consequences this will have for France.

The Russian Defense Ministry said that they did not see a special tragedy in connection with the refusal of supplies. “The Ministry of Defense does not see this as a special tragedy, although, of course, this is unpleasant and imposes certain tension in cooperation with the French partners, but refusal of this contract will not be a tragedy for us in terms of rearmament and implementation of the state armament program,” ITAR told TASS Deputy Minister of Defense Yuri Borisov.

For the first time, a threat to suspend the supply of Mistrals was voiced by French Foreign Minister Laurent Fabius in mid-March 2014. “After a certain limit there will be a reaction, including strength. We cannot allow them [Russia] to do everything. First, France may terminate the contract with Russia for the supply of two Mistral ships under construction in Saint-Nazaire. If Putin continues what he is doing, we can consider canceling these supplies, ”he said.

Russian Deputy Prime Minister Dmitry Rogozin responded to Fabius’s statement. “In the highly sensitive area of ​​the military-technical cooperation, France is beginning to undermine its credibility as a reliable supplier. All these political waves around the referendum in Crimea will pass soon; our countries will have to work together further. Perhaps a colleague is not aware of the number of jobs in France created through our partnership. I ask European colleagues not to escalate the situation, ”he said. Later, Deputy Defense Minister Yuri Borisov told reporters that if the deal on helicopter carriers breaks, then Russia will demand compensation for losses under the contract.

During the spring-summer of 2014, the situation around the supply of helicopter carriers was constantly changing. So, in May, French Foreign Minister Fabius said that the signed contracts would be respected. At the end of May, American congressmen proposed NATO to buy or lease helicopter carriers from France.

Then French President Francois Hollande said that France sees no reason not to supply helicopter carriers to Russia. “France is committed to fulfilling the contract that was signed in 2011. Today we are fulfilling this contract. At the moment, no third-level sanctions or those that could lead to the cancellation of certain supplies have been adopted. Therefore, contact is made, it is extremely simple, ”he said. At the end of June, 400 Russian sailors embarked on the development of military equipment and the ships themselves.

The situation around the helicopter carriers began to change in late July. During a meeting with reporters, French President Francois Hollande said that the delivery of the first Mistral will be completed on time, but the delivery of the second ship will “depend on the position of Russia.” However, when adopting sectoral sanctions at the end of July, it was indicated that contracts for the supply of ships would be fulfilled. In early August, NATO proposed France to refuse supplies and buy back the French contract.

The fact that helicopter carriers could fall under the arms embargo was reported on September 1. Embargoes can be extended to existing military contracts.

France is building two Mistral class landing helicopters for Russia. The contract was signed on June 17, 2011 at the St. Petersburg International Economic Forum. The transaction amount is just over € 1.1 billion. The cost of directly building two helicopter carriers is € 980 million, the rest of the costs involve the adaptation of technical documentation. 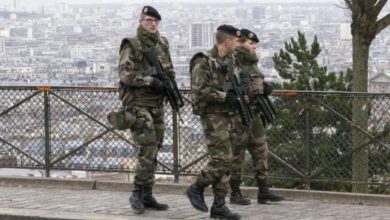