Finland officially announced its intention to join the NATO alliance, as Russia’s invasion of Ukraine dramatically shifts security considerations in Europe and ends decades of the Nordic nation’s military nonalignment.

Speaking at a news conference in Helsinki alongside the country’s Prime Minister Sanna Marin, Finnish President Sauli Niinisto described it as a “historic day.”

The decision still needs to be ratified by Finland’s parliament — but that is considered largely a formality.

It represents a seminal shift in military thinking in northern Europe following Russian President Vladimir Putin’s invasion of Ukraine. Amid threats from Moscow over NATO’s eastern expansion, Finland, which shares more than 800 miles of border with Russia, had held back from joining the 30-country military alliance since it was formed in 1949.

But since Russian tanks rolled into Ukraine in late February, support for joining NATO has surged among the Finnish public.

“Finland will maximize its security,” Niinisto said. Marin described it as an “important decision.”

“In Finland we still have the parliamentary process ahead of us, but I trust the Parliament will debate this historic decision with determination and responsibility,” she said.

The announcement came as NATO foreign ministers met in Berlin to discuss Finland and Sweden’s path to membership. Sweden, which has been closely coordinating with Helsinki on its decision on whether to join the military alliance, is expected to follow suit.

Finland’s leaders said Thursday that the countries should join NATO without delay, but the formal decision came Sunday after the president and a committee on foreign and security policy finalized a report on Finland’s accession to the alliance. The report will be submitted to Parliament on Monday.

NATO requires unanimity on the approval of new members, and Turkey has expressed skepticism over Finland and Sweden joining the alliance.

U.S. officials are hoping to smooth out differences within the alliance following Turkish President Recep Tayyip Erdogan’s pointed criticism of Sweden and Finland as “home to many terrorist organizations.”

The comments, referring mainly to the Kurdistan Workers’ Party, a militant organization known as the PKK, were seen as a threat by Turkey to veto any NATO expansion.

Hope that a compromise could be brokered emerged Saturday after an Erdogan adviser told Reuters: “We are not closing the door. But we are basically raising this issue as a matter of national security for Turkey.”

And in Berlin on Sunday, officials from other NATO countries expressed optimism that the process would move ahead.

German Foreign Minister Annalena Baerbock said that the two countries could join “very quickly” if they took that decision.

“Our doors are more than open and if their parliaments and their societies are going to decide to join NATO, this will make us even stronger,” she said. Germany is prepared to do everything it can for a “quick ratification process,” she added.

During the Berlin meeting, Secretary of State Antony Blinken also met with Ukrainian Foreign Minister Dmytro Kuleba to discuss military aid for Ukraine and the continuation of food exports to the developing world.

“More weapons and other aid is on the way to Ukraine,” Kuleba tweeted after the meeting. “We agreed to work closely together to ensure that Ukrainian food exports reach consumers in Africa and Asia.”

The State Department said Blinken discussed “details regarding the latest tranche of U.S. security assistance to bolster Ukraine’s defenses” and potential solutions to exporting Ukraine’s grain to international markets. The ongoing fighting in Ukraine, a major food exporter, has been linked to rising food prices and inflation in the developing world.

President Biden is expected to sign a $40 billion security package for Ukraine in coming days after passage in the Senate.

The invasion also means there’s little Russia can do about it.

The Russian military is ensnared in heavy fighting in Ukraine, its ranks depleted by steep losses of men and equipment. Russia withdrew troops from the border with Finland to send them to Ukraine, leaving Moscow with a significantly reduced capacity to threaten Finland militarily.

Russia supplies Finland with small quantities of gas and oil, but Finland was already preparing to sever those supplies in keeping with European Union decisions to reduce dependency on Russian energy. One possible early response came Saturday with an announcement by the Russian state-owned company RAO Nordic that it has halted electricity exports to Finland, although it was unclear whether the move was intended as a punishment. Russia blamed Western sanctions for the move, saying they had made it difficult for Russia to receive payments for the supplies.

Finland shrugged off the action. Finnish officials said they had already been scaling back imports of Russian electricity to guard against possible attacks on the country’s infrastructure, and Russian electricity accounted for only 10 percent of its consumption.

Russia may try to launch cyberattacks against Finnish infrastructure or wage hybrid warfare in an attempt to sway Finnish public opinion, but Finland has highly developed systems capable of countering any such efforts, said retired Maj. Gen. Pekka Toveri, a former chief of Finnish military intelligence.

“They actually don’t have much they can use to threaten us,” Toveri said. “They don’t have political, military or economic power.”

Finland’s decision, expected to be formally announced Sunday, upends the balance of power along the northern borders of the NATO alliance. In the coming days, Sweden is expected to follow Finland’s lead and also seek NATO membership. But it is Finland’s accession that will have the biggest impact on Russia, serving to double the size of Russia’s land border with NATO and entirely encircle its three ports on the Baltic Sea.

For decades, Finland had refrained from joining NATO for fear of provoking its larger, nuclear-armed neighbor. And Russian President Vladimir Putin had kept those fears alive with vague threats of war and menacing acts of harassment in Finnish airspace and waters.

The invasion of Ukraine overturned that calculation, prompting Finns to conclude they would be safer under NATO’s protective umbrella than left to deal with Russia alone. Before the war, only 20 percent of Finns supported joining NATO. By May, that figure had reached 76 percent.

Finns have also concluded that the Russian military’s unexpectedly dismal performance and setbacks on the battlefield in Ukraine suggest it no longer poses the threat it once did, Toveri said.

“Russia is so weak now they couldn’t risk another humiliating defeat,” he said. If Russia were to attempt to send troops into Finland “in a couple of days they would be wiped out. The risk of humiliating defeat is high, and I don’t think they can take that.”

For the Kremlin “it’s a really ironic moment,” said Lauren Speranza, director of Transatlantic Defense and Security at the Center for European Policy Analysis. Deterring NATO enlargement was one of Putin’s declared goals in attacking Ukraine, which had been seeking NATO membership. Finland and Sweden had not — until the Ukraine invasion, she noted.

“Not only does Putin have a huge failure on his hands in terms of his military objectives in Ukraine, but he’s also enlarged NATO, which was the exact opposite of what he wanted,” Speranza said. “It underscores what a huge strategic miscalculation this was.”

Already, Moscow appears to be dialing down its threats of retaliation. In a telephone call Saturday, Putin told Finnish President Sauli Niinisto that Finland’s decision to join NATO is “wrong” and could have “a negative effect” on Russian-Finnish relations — but he didn’t make specific threats, according to a readout from the Kremlin.

Niinisto, who initiated the call, bluntly told Putin that it was above all his “massive invasion” of Ukraine that prompted Finland to seek the protection afforded by the NATO security alliance, according to a statement from his office.

“The conversation was direct and straightforward and it was conducted without aggravations. Avoiding tensions was considered important,” the statement said.

In the weeks preceding Finland’s announcement, Russian officials had warned of dire repercussions, including the deployment of nuclear weapons in the vicinity and the dispatch of military reinforcements to the Finnish border.

They have since been more circumspect, saying Russia’s response will depend on how far NATO goes toward establishing a presence on Russia’s border.

The decision will require Russia to offer a “political reaction,” Russian news outlets quoted Deputy Foreign Minister Alexander Grushko as saying on Saturday — a step back from the “military and technical” response threatened by Kremlin spokesman Dmitry Peskov on Thursday.

He also said it was “too early to talk about the deployment of nuclear weapons in the Baltic region” and added that “Moscow will not be guided by emotions” in deciding its response.

Russia will conduct a “thorough analysis” of any new configuration of forces on its border before deciding on its response, he said, echoing Peskov’s comments that the degree of Russian retaliation will depend on how much NATO military infrastructure will be established on Russia’s borders.

No decisions have been reached on what kind of presence NATO will establish in Finland and Sweden once their accession has been formalized, which could be several months away. A new hitch has emerged in the form of Turkish President Recep Tayyip Erdogan’s objection to their membership on the grounds that Sweden hosts members of the outlawed Kurdistan Workers’ Party, or PKK.

But it is highly likely that Finland’s membership won’t require a significant NATO troop presence, analysts say. Finland has a robust and well-equipped army that has conducted regular training exercises with NATO countries. Its military is already well integrated with NATO military systems.

So great is the threat to Russia’s strategic interests that Moscow will be compelled to take some form of action against Finland, said Dmitry Suslov of National Research University Higher School of Economics in Moscow.

At a minimum, he said, Russia will need to fortify its military presence along the Finnish border because Finland will no longer be considered a “friendly” country. It will also have to step up its naval presence in the Baltic Sea which will become, he said, “a NATO lake.”

The North Atlantic Treaty Organization (NATO) is a military and political alliance of 30 mostly European members, shown above in blue. Ukraine and Russia are not members. After Russia invaded Ukraine last week, NATO sent troops to its members near Ukraine and sent weapons to aid Ukraine in its defense.

If the United States or Britain establish bases in Finland, Russia will have “no choice but to deploy tactical nuclear weapons to target those bases,” Suslov warned.

Finland is braced for further actions, said former Finnish general Toveri, if only because Putin may feel the need to save face. But Finns have become accustomed over decades to living with a potentially hostile power on their borders, and don’t feel unduly threatened, he said. “We are used to the fact that the Russians are there. Most Finns aren’t too anxious about it.” 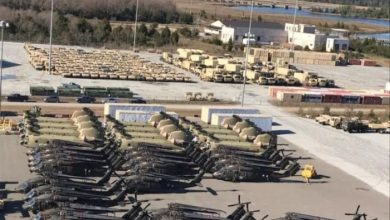 Reinforce the Baltic states with US troops 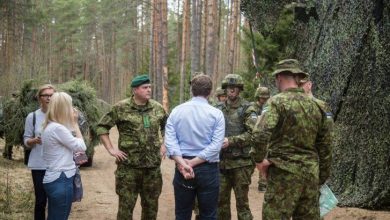 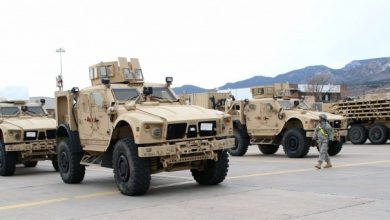