Most often, readers asked our guest how to become a beauty.

Maria Cherkunova: – I have been practicing karate for 5 years and I am able to stand up for myself!

Maria CHERKUNOVA was born in Kiev on February 2, 1990. She graduated from the gymnasium of oriental languages, participated in local and All-Ukrainian Olympiads, the Small Academy of Sciences. In 2007, she entered the Kyiv University “Holy Light”. He speaks English, Japanese and Korean.

For a year and a half of model work, she participated in dozens of shows by famous designers.

Hello Maria! Irina from Kiev. Congratulations on your successful performance! And the question is: how do you follow your figure?

Hello Irina! First of all, swimming. I go to the pool regularly. Well, and of course less fat, sweet, bread. And more water, liquid.

Is it hard to refuse him?

I will not lie – very much!

This is Natasha, Kiev. Maria, admit how you feel about handsome men?

“Well, do not you think that a man should be“ a little prettier than a monkey ”?

“Of course, not bad if he’s a handsome guy.” But beauty is not the main thing.

“I like the blue-eyed blondes.” As for the character, I am a very picky person: my chosen one should be smart and with a sense of humor.

I’m calling you from Zaporozhye. There is a proverb: “Do not be born beautiful, but be born happy.” Are you happy?

Forgive me if I say not what you expected: after all, beauty is one of the factors of happiness. Because if you are pretty, they pay more attention to you, open up great opportunities, etc.

“But there are many beautiful women who are unhappy in their personal lives?”

Happiness depends not least on the person himself. That is, if you want to be happy, then achieve this! And if a certain person has some internal problems, then you should not blame the rest.

Katya, Kiev. Maria, tell me: what qualities are most appreciated by the jury of all kinds of beauty contests?

Firstly, you need to be a very sociable and friendly girl. It is very desirable for the contestant to know as many foreign languages ​​as possible. Well, of course, in addition to beauty, a girl should have intellectual abilities at the level.

By the way, by age you were probably one of the youngest in this contest?

Yes, mostly older girls participated there – from 20 to 23 years old. And the oldest was 26 years old.

Does age matter in this matter?

“I think not. Although, after 30, you yourself understand.”

By the way, there are legends that the contestants are at odds with each other.

Thank God, everything was fine with us in this regard. I also heard various horror films on this subject. But, thank God, we didn’t have this: nobody put glass in shoes for anyone, etc.

Maria, hello! This is Alexei from Kiev. How exactly do you think: is it still a myth or is it true that Ukrainians are the most beautiful in the world?

And in second place, who would you put after us?

Masha, do you have an idol?

“Yes, but I would not call him an idol.” Just a person I’m very proud of. This is Yulia Tymoshenko.

“Are you wearing the same braid?”

Of course not. I like her personal qualities. She is a very courageous woman, and always achieves her goal.This is Slavik from Cherkasy. Psychologists say that beautiful and ugly girls need to be raised in different ways. Masha, have you been explained to you since childhood that you are better than others?

Each child is the best and most beautiful for their parents. But I was raised as an ordinary child – it wasn’t such that you, they say, are the most beautiful, etc.

It’s just that the girl who does the housework washes the dishes, her nails are broken and her skin is not very … Beauty must be protected. For example, did your parents take care of you?

“My parents, of course, have always taken care of me.” But, it happened that when I came to my grandmother in the village, I could dig up a bed, wash the dishes, and clean the house. It’s not a problem for me. From the age of 4 I love to housekeeping in the kitchen. In the gymnasium, two girls from Korea taught us, they taught me how to cook different dishes: cakes, cakes, salads. And even sea kale chips!

Alexander, Dnepropetrovsk. I heard that you are studying in Kiev at a university related to oriental languages. What kind of university is this, and why did you enter it? Did the beauty contest interfere with the session, and how did the institute react to your victory?

I study at Kiev University of Oriental Languages, I study English, Japanese and Korean there. And before that, I studied at the gymnasium of oriental languages, there we were taught English and Korean – so I went there to study.

That is, if a Korean calls you now, can you answer him in his native language?

Yes, I’ll try. By the way, at this contest we had a Korean girl, she did not speak English well, and we and her director spoke easily in Korean, even made friends. They were still very surprised that the Ukrainian speaks Korean. And probably everyone was told about it, so then when they met everyone turned to me: “This is the non-Korean who knows Korean!”

And you did not reproach your girlfriend for the fact that they – Koreans – eat dogs?

You know, for them this is a sore point already. Even in the gymnasium, we had a volunteer teacher from South Korea.

So she said that they have not eaten dogs for a long time.

And at the university, my forced absence due to the trip to the competition was treated with understanding. They calmly let go, gave a respite, and now they are very well received.So you can say that the session was easier than usual?

Not. I have a session ahead (laughs).

And who do you see yourself after the University of Oriental Languages?

I also want to go to MGIMO to the faculty of international relations, to a diplomatic specialty (with an eye on Korea, of course). You know, I already know so much about this country that Korea has become like a native to me: culture, language, traditions – everything, everything, everything.

“Have you been to Korea before?”

“I didn’t have much time — just three weeks.” But in these three weeks I was able to do more than others in 3-4 months.

“Maria, I already read about you in the newspapers: apparently, you are a modest person.” So tell me: your modesty doesn’t interfere with your model career?

When you feel that you need to achieve something, or you see that someone is impudent, crawls on his head, or is doing his own in different ways, I try to somehow moderate my modesty and rebuff. Sometimes I am very ashamed of some Ukrainians. You go, for example, in a minibus, and there healthy men sit and do not give way to a woman with a child or a pregnant woman, push around … They do not smile, they don’t say thank you to the driver …

“Do you say thank you to the minibus driver?”

Are you a native of Kiev? 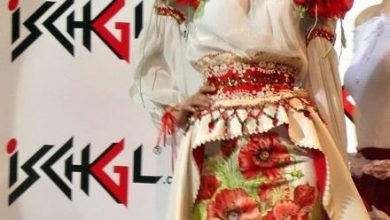