An extraordinary meeting of the heads of state and government of 27 countries participating in the European Union was held in the Belgian capital. The meeting was dedicated to the development of a common position of all partners, which the EU will present at the upcoming summit in Washington. The summit of leaders of 20 countries will come to this summit on November 15 to launch the reform of the global financial system, which is clearly not justifying itself.

Before such an important meeting, each participant prepares his proposals. Since far from all EU countries will be represented at this forum, it was decided that France, currently chairing the EU, will speak in Washington on behalf of all 27 members of this organization.

During the meeting, many differences were revealed in the views on how to deal more effectively with crisis phenomena. Some proposals were even rejected, for example, the idea of ​​Nicolas Sarkozy to create a kind of “economic government of the euro zone.” There was also criticism that Spain and the Netherlands were not invited to the summit, although these countries play an important role in the world economy.

As a result, having identified the differences, the European leaders have developed a unified position, which will be made in Washington. Its main provisions are as follows. An indisputable fact – the global financial system requires a radical reform. Based on this, it is necessary to involve the full coordination of the economic policies of all countries of the planet. Economic policy and all stocks in this area should be transparent, open. The International Monetary Fund should become the main coordinating and controlling body of the global financial system, a kind of gendarme in this area. Exactly 100 days after the summit in Washington, a new summit should be convened, taking into account the fact that Barack Obama will already replace George W. Bush in the White House.

The participants in the meeting in Brussels supplemented the basic principles of their position with more specific developments and draft measures in relation to speculative funds, countries of the “tax haven”, regarding risk avoidance when providing loans and so on.

During the discussions, the Prime Minister of Luxembourg, Jean-Claude Juncker, who is also the permanent chairman of the Eurogroup, the financial control body in the euro area, elaborated on the causes of the financial crisis that erupted throughout. With the facts and figures, Juncker explains the crisis that has created the US economic policy, which has led to the fact that the country has two huge, almost a trillion dollars, deficits – trade and budget. In fact, the US lives in debt at the expense of other countries, which ultimately led to the current crisis. 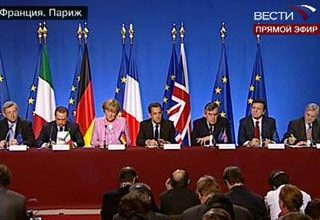 Europe must speak with one voice